The art work that was created for the Dimensions exhibition comes from the creativity, thoughts and feelings within the young people at Donut Creative Arts Studio (DCAS). The exhibition is based around the theme of ‘our world and alternative realities’. I’m sure you will be surprised, moved and inspired by the students work.

The young people decided on the theme of ‘our world and alternative realities.’ They wanted a subject that reflected everybody’s different opinions and diverse styles of art work. Some young people wanted to create beautiful uplifting art work and some wanted go produce art with a message. It was clear that there was a split in opinion. Staff suggested that they used this ‘split’ in opinions within the overall concept, so it was decided that the exhibition space would literally be split down the centre into two very different styles. One side would reflect our modern society in different ways and the other would reflect the young peoples idea about alternative realities.

Once we had discussed and debated many of the different aspects of the art exhibition the group started working on initial ideas. Each student then chose their best idea and developed it further with support from staff. Once planned out the students went to work.

After a democratic vote and various discussions it was decided that the exhibition was going to be called ‘Dimensions’.

From this name the group constructed the concept for the publicity. Students used face paints on one side of their faces to illustrate the ‘split’ concept. The photographs that were taken we then used to create the publicity material. Resulting in a powerful concept and identity.

There were many forms of art work considered for this exhibition; the young people didn’t want it all to be two dimensional pictures on the wall. Sculptures, sound and installations have been discussed and created by the young people and supported by DCAS staff.

Over the many weeks of producing art the young people were inspired and worked hard to execute their ideas. Each individual and group supported one another in some way, using individual skills to benefit the group as a whole and the art work. The end result is an inspirational project built by young people.

As part of the exhibition week we also held an acoustic gig and celebration event for the artists, friends and family. 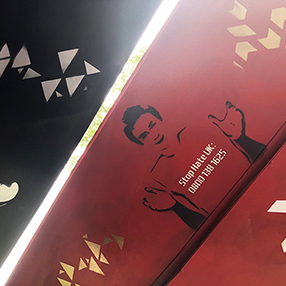