The art work created for this exhibition in 2019 comes from thoughts and feelings within the young people at Donut Creative Arts Studio (DCAS) and some primary schools in Chesterfield, all based around the theme of individual and group identity.

Firstly we had to decide what the exhibition would be about. After many discussions and heated debates about issues and subject matters that are important and relevant to young people in our modern world, we decided on the theme of identity. The young people wanted to create art work that reflected themselves, their likes, dislikes, beliefs and all that links to them.

Once we had discussed the theme the group split into smaller groups and individuals. We then pursued the ideas in greater depth. Each individual came up with at least one idea for a piece of art work. Once planned out the students went to work.

The young people and staff discussed ideas for an exhibition name. Many great suggestions were made and debates had. The result was a combination of a vote and staff decision based on possible identities. It was decided that the exhibition was going to be called ‘This is ME, This is US’.

From this name we constructed the concept for the images, recruited young people to model and started to shoot various poses. The images turned out well and were used as a starting point for the poster design. Consultation with young people took place and a finished poster was created.

There were many forms of art work considered for this exhibition; the young people didn’t want it all to be two dimensional pictures on the wall. Sculptures and installations have been planned and created by the young people and supported by DCAS staff. Sound and light are also to play an important part in the atmosphere of the exhibition.

Over the many weeks of producing art the young people were inspired and they worked hard to execute their ideas. Each individual and group supported one another in some way, using individual skills to benefit the group as a whole and the art work. The end result is an inspirational project built by young people. I hope you enjoy it as much as we have enjoyed creating it! 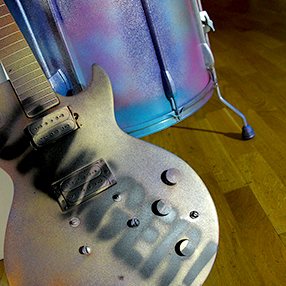